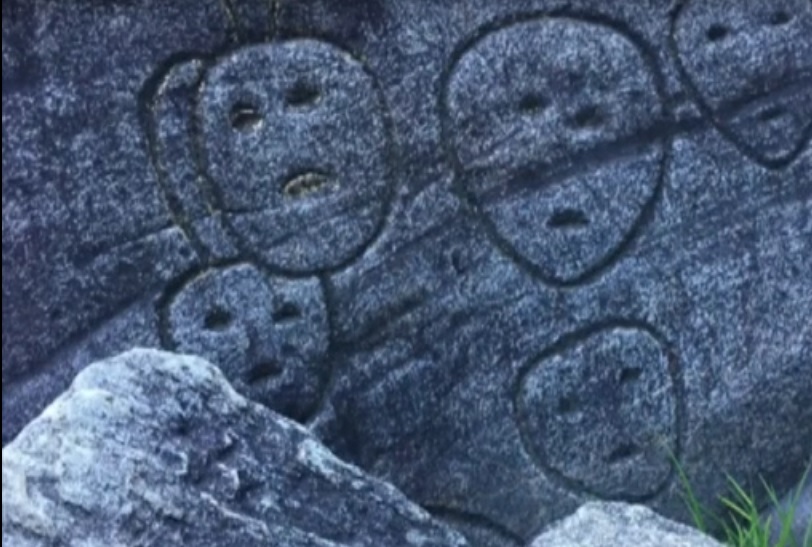 The faces have oval outlines, two round holes for eyes, and a dash or oval for a mouth. Some of the faces have lines rising from their heads like rays of sunshine

Nested in the sleepy town of what is now Bellows Falls, Vermont, within the oversight  of the Elnu Abenaki Tribe, rests a National Register of Historic Places site known to locals simply as “The Faces.”  They consist of two panels of bedrock wall inscribed with petroglyphs or stone carvings. The Faces can be seen from the Vilas Bridge adjacent to the north or by traversing a 30 ft rock face.

Depending on who you ask, the age of the site varies from 300 to 3,000 years old, but some locals think it is much older. One possible reason for the lack of accurate dating may be the modification that has taken place at the site. At the turn of the century, extensive damage was done in the name of progress, when the northern panel of carvings was buried by rock and debris caused by dynamite blasts meant to redirect the water flow of the river. In the early 1930s in an effort to make The Faces more visible, the site was damaged and reconfigured by a stone cutter hired by the Daughters of the American Revolution. Again in 1961 they were further damaged by people with good intentions painting them yellow.

Over the years, The Faces were studied by many scholars of the 19th, 20th, and 21st centuries who conjectured about the origins of the stone carvings, how many faces are present, and many offered interpretations. “A New Look at Vermont’s Oldest Art: Understanding the  Bellows Falls Petroglyphs,” by William A Haviland and Marjory W Powers” begins with the statement, “It is evident that shamans came to Bellows Falls on numerous occasions to interact with the spirit world.” The ethnographic term “shamans” is not used in the Abenaki language, nor is it culturally appropriate. Haviland and Powers’ statement implies that the significance of the site was limited to a select few specialists in the distant past. Indeed,  although medicine people travel here with and on behalf of their people, it is not necessarily on solo quests. Local Abenaki people still maintain a strong relationship with this place as evidenced by their regular visitation as part of their ongoing stewardship of the lands and waters.

The southern panel of The Faces can be reached via a narrow, stony path down toward Kchi Pôntekw (in English known as the Great Falls). The Elnu Abenaki people know this to be a sacred place where their families have come to ceremony for generations. JES, who is almost 90 years old, fondly remembers his grandfather bringing him to this special sacred site when he was a child. Locals remember small red bundles being tied to the trees as offerings. Figure 1 illustrates an Elnu Abenaki Tribe gathering at The Faces.

View looking down at The Faces from the Vilas Bridge as citizens of the Elnu Abenaki Tribe gather. 1998. Courtesy of the author.

The Elnu people continue to gather for ceremonies and steward the land and waters near The Faces because they understand the significance of this place and a similar site where the West River and Connecticut meet in Wantastegok (Brattleboro). Both locations have similar traits including the geologic formations, proximity to the water, and to Abenaki burial grounds. Additionally, both were known to have whirlpools that act as portals to another place.

The site along the West River was flooded when the Vernon dam was built in 1909 and since that time the petroglyphs have been covered by silt and water. However, after decades of research and dives searching the rivers, professional diver Annette Spaulding located one face (2015) and then a portion of a panel (2017). Then, under fifteen feet of water, “two and a half feet of silt and sand” Spaulding located nine more petroglyphs and additional zoomorphic figures.

The Elnu Abenaki Tribe is working with the Vermont Land Trust to maintain access to their sacred lands and protect them from development.