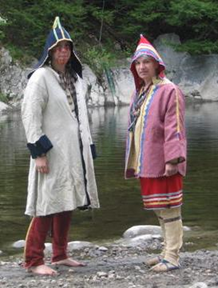 Rose Hartwell, Abenaki Elder, stands with a friend at the Salmon Hole fishing site along the West River.

Fishing is almost as important today for the Alnôbak (Abenaki people) as it was hundreds or even thousands of years ago, but the salmon that once rushed through the salmon hole are nearly gone due to industrialization, deforestation, and runoff.

This work represents the first systematic excavation of this well known but poorly understood site and was carried out in advance of much-needed park facility upgrades. During the dig, Elnu Abenaki Tribe Sôgemô (Chief), Elders, and citizens watched over the digsite as it was excavated and provided cultural interpretation during an evening program for the public. Archaeologist Jess Robinson of UVM’s Consulting Archaeology Program gave a presentation about the cultural objects that were found, and the Elnu Abenaki Tribe did several presentations on regional plant fiber weaving, singing, and storytelling.